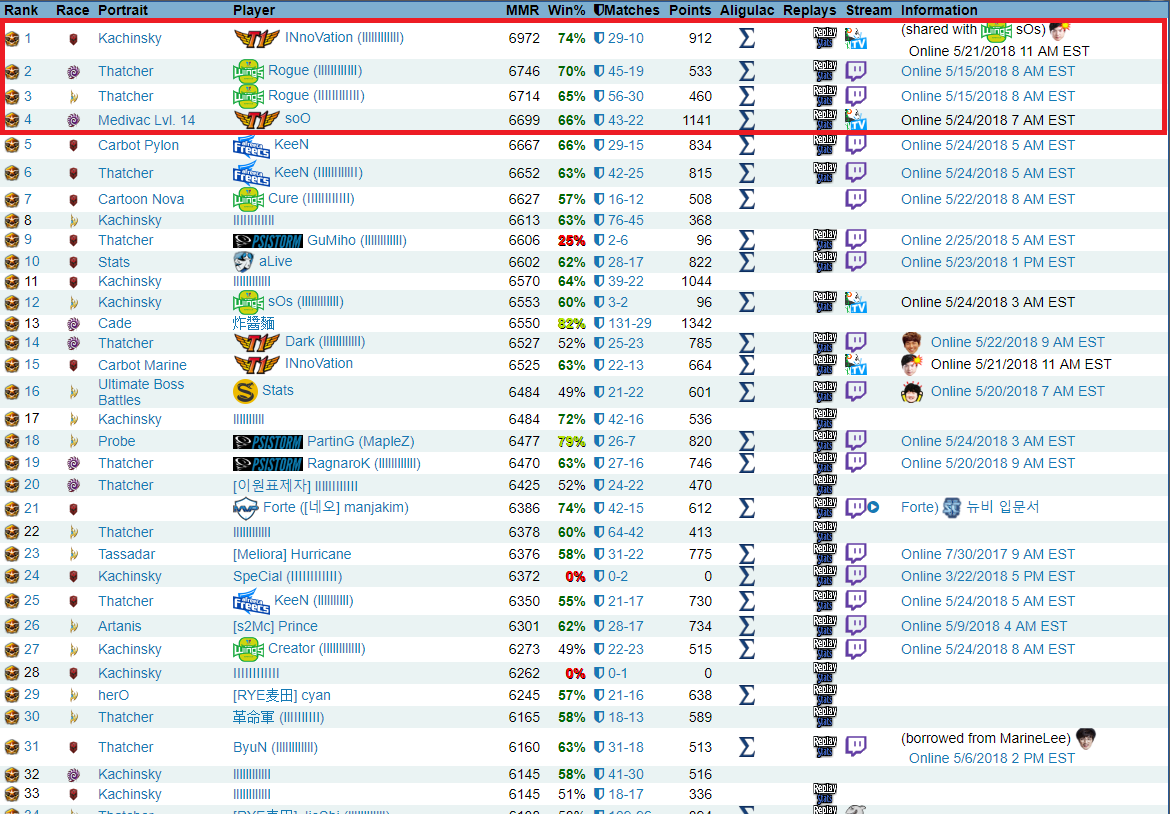 As far as actual predictions goes, Inno plus one of the Zergs. By my estimation:

While I would say that Rogue is probably the strongest overall player in Group B, the way the group is set up is such that Inno actually has the best chance of advancing. Whereas Rogue has to play ZvZ against soO and ZvT against Inno–their strongest MUs respectively–Inno gets to play his strongest MU twice and faces a relatively weak Protoss (Dear) in his weakest MU. Rogue on the other hand is strongest in ZvP, but he'll need to beat at least one of soO or Inno to advance.
Is Dear's PvT really that good? He plays his stargate playstyle reasonably well, but it's also the most one dimensional of any Protoss near the top, which in a preparation tournament is a huge detriment.
By a coincidence, Dear and Inno met in the finals of KungFu Cap today, and Inno won 3-2 coming back from a 0-2 deficit. Also, Dear beat Rogue 2-0 in an earlier round.
soO gonna go angry zerg mode on Rogue to advance first place.

Rogue vs Inno is a complete coinflip. Both have champions in them, but also some seriously bad showings so far this year.

soO advances to the Round of 4

i agree with ur predictions, am excited
On May 25 2018 10:34 ZigguratOfUr wrote:
Is Dear's PvT really that good? He plays his stargate playstyle reasonably well, but it's also the most one dimensional of any Protoss near the top, which in a preparation tournament is a huge detriment.

i think dear would feel he has better chances vs inno than rogue or soo in this group, but that's just my feeling, those zergs are really good in longer series, and they own against toss. however apparently soo beat rogue recently ? i didnt see
Just fyi front page link takes you to the group a preview
I predict Dear and Rogue...

I'm affraid of his stubborness tactics. Many times I've seen he sticks to one no matter how MU goes (vs Rogue in Blizzcon final not reacting to speelings all-ins or vs Stats in semi-finals GSL 18 season 1). I would love him to do some fancy play like hatch proxy, nydus or ultras drops to catch oppo like Rogue is doing. Anyway will pray for him.
Not sure what soOs current form is like, but he's the best so he should win this season of GSL!
Im gonna go out on a limb and say

Rogue
soO > Dear
Rogue > INnoVation
soO > Rogue
Dear > INnoVation
Dear > Rogue
Do your thing SoO
Rogue moves on to the round of 4 slaying Inno, soO and Zest
Pretty good analysis. But Dear likely won't take a match, meaning Rogue will defeat InNoVation twice.
I have Rogue and Innovation getting out but I wish it where Rogue and Dear. However I cannot bet my heart at this time.
My brain says Rogue and INnoVation, my Heart says soO and INno.

soO will not be denied.
Predicting INnoVation to lose first in a group is freaking bold. I'm betting on INnoVation and soO making it out.
thanks for the preview. sick group! Inno went 3-1 on the ladder today against Rogue which is interesting
man im so fuckin hyped rn
On May 26 2018 01:49 dave81 wrote:
I have Rogue and Innovation getting out but I wish it where Rogue and Dear. However I cannot bet my heart at this time.

correct in placement not quite in matches :D
Well, I misjudged this one horribly haha. Rogue played very well and so did Dear (with some misplays by soO). Anyone here actually predict Dear to make it out?
Literally the poster above you did. : ) Pretty close to what happened too.
--- Nuked ---
On June 02 2018 03:40 imenz wrote:
а почему никогда не кидают 2 ядерок одновременно почему всегда оставяют окно что бы соперник среагировал
Exactly.
Normal
Live Events